Commemoration of the tenth anniversary of the death of Fr. Jaki 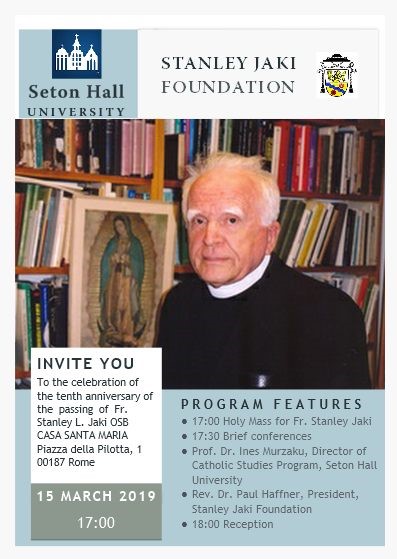 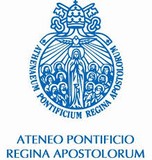 The legacy of  Fr Stanley L. Jaki, ten years after his death

Congress in Győr 2019
In the footprints of a Templeton prize winner: commemorating Stanley L. Jaki OSB

10 December 2019
Location: Hungary, Győr
Czuczor Gergely Bencés Gimnázium Széchenyi tér 8-9
Program
10.00-10.10 Welcome
10.10-10.20 Szilveszter Vizi E.: Jáki Szaniszló OSB a tudós, a hit védelmezője
10.20-10.40 Zoltán Frenyó (MTA-BTK) The Cosmological Argument in Stanley L. Jaki’s Thinking, and the Roads of the European Metaphysics
Starting from Stanley L. Jaki’s work God and the Cosmologists, and taking into account the cosmological argument, the lecture compares the concepts of the created world and the eternal world, and aims to relate Greek and Christian ontology.
10.45-11.05 László Székely (MTA-BTK) John-Paul II and Stanley Jáki on the Relation between Science and Theology
In the second half of twentieth century, the Vatican discussed the relation between science and theology at least twice at the highest level: in the encyclical of Pius XII On the Proof of Existence of God in the Light of Modern Natural Science in 1951 and in the address of John Paul II on Galileo’s case on 31 October 1992. While the encyclical of 1951 laid emphasis on the difference between science and theology, the analysis of the relation between these two basic fields of human thought by St John Paul II is considerably more discerning and profound. Of course the his approach did not emerge at once. It was carefully prepared by a committee delegated by the Pope, and this committee took into account the results of philosophical and theological research for four preceding decades. Stanley Jáki (who was named by John Paul II an honorary member of the Pontifical Academy of Sciences in September 1990) was one of the most relevant researchers working in this field, whose work (especially concerning the relation between scientific cosmology and theology) was directed at the foundation and elaboration of an approach represented later by the Pope.
In my talk, I compare the views of John Paul II and Stanley Jáki on the relations between science and theology, and indicate that Vatican viewpoint in 1992 corresponds to the concept formulated by Jáki’s. While Jáki held a critical view of Pius XII's encyclical, his approach and that of the Vatican became more harmonious by 1992: one may say that Pope John Paul II espoused the view held by Jáki among others. On the other hand, our honour for him would not be sincere if we remained silent about those aspects of his work with which we are not in complete agreement. At the end of my talk, I will briefly engage his criticism of Teilhard de Chardin’s cosmology and an aspect of his concept of the relation between physics and Gödel’s theorem.

11.10-11.30 Ferenc András (PE-MFTK) Faith, knowledge and understanding — Their role and significance in contemporary language philosophy
The traditional, medieval, distinction of faith and knowledge, faith and reason, has a different focus but has the same importance in modern linguistic philosophy in the XX-XXI centuries. The focus of my presentation is the change of conceptual roles. Behind these can be seen the paradigm shift of the modern age. In my historical review, I examine turning points and the reasons for turning points that made the concepts of "knowledge" and "understanding" inseparable from the social character of man.

11.50-12.10 Péter Soltész (BGE) Jaki-Islam-Benedict
The analysis of the relationship between faith and reason goes along the important scientific work of Father Stanley Jáki. He was prepared for this educationally: first, he received his doctoral degree in theology in Rome and some years later a doctorate in physics under the guidance of Victor F. Hess, a Nobel Prize physicist. In addition, his dedication to studying helped him achieve important results in the field of comparative research of  major world religions, with particular attention to the relationship between religion and the mind.
Father Jáki considered the birth of modern natural sciences to arise from the conceptualisation of the three fundamental laws of motion. One of his finest results was the demonstration of why the milieu of non-Christian religions was not conducive to the birth of modern science and why the Christian spark made it possible. This comparative study generated countless important consequences. In particular, Jáki’s thought resulted in tangible effects upon the thinking of the Pope Benedict XVI, who, already as Cardinal Ratzinger, was acquainted with several works of Father Jáki. This intellectual cross-fertilisation is especially detectable in speeches touching upon the relations between Christianity and Islam, showing that the Holy Father, having no firm background in natural sciences, trusted Jáki’s thinking in the field of religion and science.
An outstanding example is the first papal speech (Regensburg) of Benedict XVI, misinterpreted—more or less deliberately—by Western liberal journalists, which generated a reaction worldwide Western as well as in Islamic circles. The striking conjecture of a hidden relation between the Regensburg speech—and other discourses—of Pope Benedict and his departure from the papal throne may not be far from the truth.

12.40-13.00 Gergely Bognár (Révai Miklós Gimnázium és Kollégium) The dogmas of science
Religion is being frequently criticized because of its dogmatic base, while the fact is mostly forgotten, that the natural sciences are based on evidences, or if you like dogmas, just as religion. This presentation reveals some natural scientific evidence in the work of Stanley L. Jaki; based on the history of science it shows their religious roots.